NIHR SPHR Public Partners Network (PAN): A report on the 2nd meeting of the PAN May 2021

NIHR SPHR Public Partners Network (PAN): A report on 2nd meeting of the PAN held on 13th May 2021
By Jean Palmer and Michelle Collins

We were warmly welcomed to the second NIHR SPHR Public Partners network meeting via zoom. The contributors came from many varied locations throughout England and have connections with the SPHR at varying levels and different ways.

All public partners involved in SPHR are automatically members of the Public Partners Network. To sign up to the PAN email list to find out about future meetings and opportunities to get involved please click on this link: Join our Public Partner Network.

During the first half hour social session, those attending were invited to engage in a team treasure hunt (see picture above) – finding a range of treasures including a picture of a younger self, a favourite cushion, a mug, pair of sunglasses etc. Public partners were also invited to contribute two words to a word cloud to show their perspective on what’s best about public involvement (see picture below). Being valued and the potential empowering nature of involvement were important aspects of involvement described by public partners, as well as diversity, being inclusive and having impact. 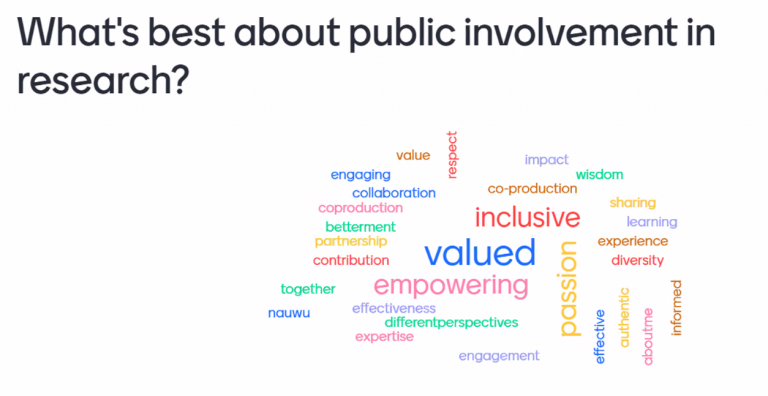 Rona Campbell the Deputy Director of SPHR and Professor of Public Health, University of Bristol opened the meeting. Rona described her role within the School and then went on to explain that Local Authorities who are responsible for public health but who have been through a period of austerity due to economic  policy  could be assisted by Public Involvement Groups (PIG). In SPHR, original and individual  programmes of research have been undertaken. There are public members on management groups and involvement at key stages of research projects. A website has been created to enhance communication. Rona ended by showing a video of training and resources available to the new generation of public health researchers being encouraged through the school.

Next we heard from Matt Egan – Professor, London School of Hygiene and Tropical Medicine who talked about research being undertaken as part of the SPHR Places & Communities research programme. Matt advocated for the importance of the public perspective and the patient lived experiences at an individual level and through community groups to inform SPHR research.

Jennie Popay – Professor of Sociology and Public Health Lancaster University and Margaret Ogden Public Partner /Contributor gave a very interesting and thought-provoking presentation concerning the evaluation and impact of public involvement across the SPHR.   The evaluation will capture the public partners input to SPHR research and work, and assess what works well and what doesn’t so that we can build on it in the future.  This will be achieved by various methods including gathering public members and researchers’ personal experiences and perspectives. Public partners then broke out into smaller groups to talk about the kinds of impacts they would like the school to focus upon in the evaluation.

Some work is already in progress on planning the evaluation and was discussed during two workshops at the NIHR SPHR Annual Scientific Meeting. To see the workshops click on these links:

Towards the end of the meeting we heard from public partners involved in the PAN Communications and Governance groups. We also discussed the new Centre for Engagement and Dissemination, which has taken over from NIHR Involve and is headed by Jeremy Taylor OBE. We also found out about the funding for the school for the next five years.

The commitment towards Public Involvement was very evident throughout the meeting.  Many public partners attending the PAN meeting also went on to attend the School’s Annual Scientific meeting that was taking place that afternoon (13th) and on the morning of the 14th.

The next virtual meeting of the PAN will be taking place in the morning of Wednesday 8th September. If you are a public partner involved in SPHR and would like to register to join this meeting, please click on this link: https://forms.office.com/r/RE32XGBDZy