The NIHR School for Public Health Research (SPHR) held its sixth Annual Scientific Meeting on Tuesday 26th March 2019 at BALTIC Centre for Contemporary Art in Gateshead. The meeting brought together almost 200 delegates with representation from across the membership of the School along with public health professionals, our colleagues in Public Health England, the wider NIHR and our public representatives.

Professor Ashley Adamson, NIHR SPHR Director, opened the event ‘healthy people, healthy places’ with an overview of the future plans for the School and discussed how the School will address key public health priorities within its research programmes and cross-cutting themes. Alice Wiseman, Director of Public Health at Gateshead Council, welcomed delegates to Gateshead, introduced the public health challenges facing the Council and described their innovative approach to tackling these challenges. 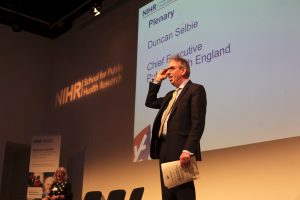 Duncan Selbie, Chief Executive at Public Health England, delivered the plenary ‘Making population health everyone’s business’.  He spoke about the importance of using research and evidence to engage with decision makers to influence policy and inspiring the next generation of public health researchers.

Research programme and theme leads presented  plans for the next three years and provided an overview of how NIHR SPHR research will help address key public health issues.

A number of SPHR researchers presented research findings from the early phase projects commissioned at the outset of the second quinquennium of the School, highlighting the breath of work and expertise across the School. 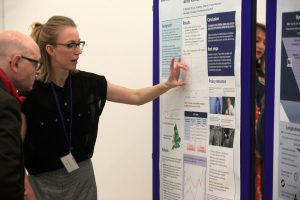