A Blog: Housing and Health: Through Our Eyes – a Photovoice Exhibition

Good housing is beneficial to health. But for many people, finding a secure, good quality place they can call home is not easy. The UK government recently described the housing market as “broken.” People who have experienced the difficulties that our housing system presents have experiences that can inform future policies and decisions. In a recent research project we used photography to help people tell their stories.

We launched a Photo-exhibition titled ‘Housing and Health: Through Our Eyes’ on 18th September at Idea Store Bow. This is a culmination of work with eight Tower Hamlets residents living in rented and temporary accommodation. The project was a partnership with Tower Hamlets Public Health, Gateway Housing Association and the London School of Hygiene & Tropical Medicine (LSHTM).

Around 24 people attended, including six participants and some of their family and friends, the Directors of Housing and Public Health in 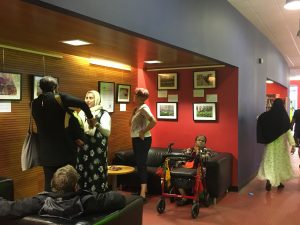 Dalya Marks and Matt Egan from LSHTM opened with a brief introduction about the research and how we used the photovoice approach. That was followed by an inspiring speech by Jackie Fearon, the Director of Resident Services at Gateway Housing Association. A brief Q&A followed in which participants and attendees had an interesting and thought-provoking conversation.

What struck us most were the reflections by attendees, particularly the power of photos to communicate stories by members of the public 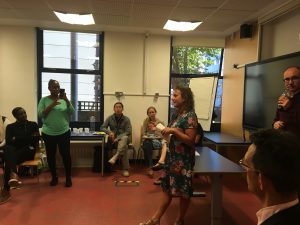 who often do not have a way of telling their story and sharing what matters to them in their lives. Through photovoice, we learned from participants that housing is not just a building or a physical shelter but is intrinsically linked to the place and community in which they live. Visitors to the launch commented that they really appreciated reading the brief written stories alongside each photo, and that they were then able to chat to residents in an informal, relaxed setting about their lived experience.

The exhibition was very well-received; we had several offers to host the photographs elsewhere.  They are currently on display at Gateway Housing Association. We also have plans to digitise the exhibition so that our participants’ stories could be shared with a wider audience.